It was to be a two-week family charter spanning three generations, each member of the trip with their own hopes and expectations. The patriarch was a high-powered business leader and even before we set off we openly discussed his fears of being ‘captive’ for two weeks aboard our luxury vessel. The matriarch was like a sponge ready to soak up as much high powered natural history information as possible – both are ardent conservationists. The four kids, from 6 to 10 years old, were the best prepared youngsters we have ever had the pleasure of leading on a trip. Their preparation already included a deep understanding of Galapagos species, ecosystems and threats, they had arrived fully kitted out with wetsuits and had undergone intensive pool training picking up weights off the bottom of their local swimming pools, honing their water skills to maximize on all the snorkeling the trip had to offer. They spent downtime writing journals, plotting our course on their individual maps, drawing pictures of the wildlife and writing postcards to friends to be posted from the famous Post Office Barrel. The whole thing was a delight from start to finish. 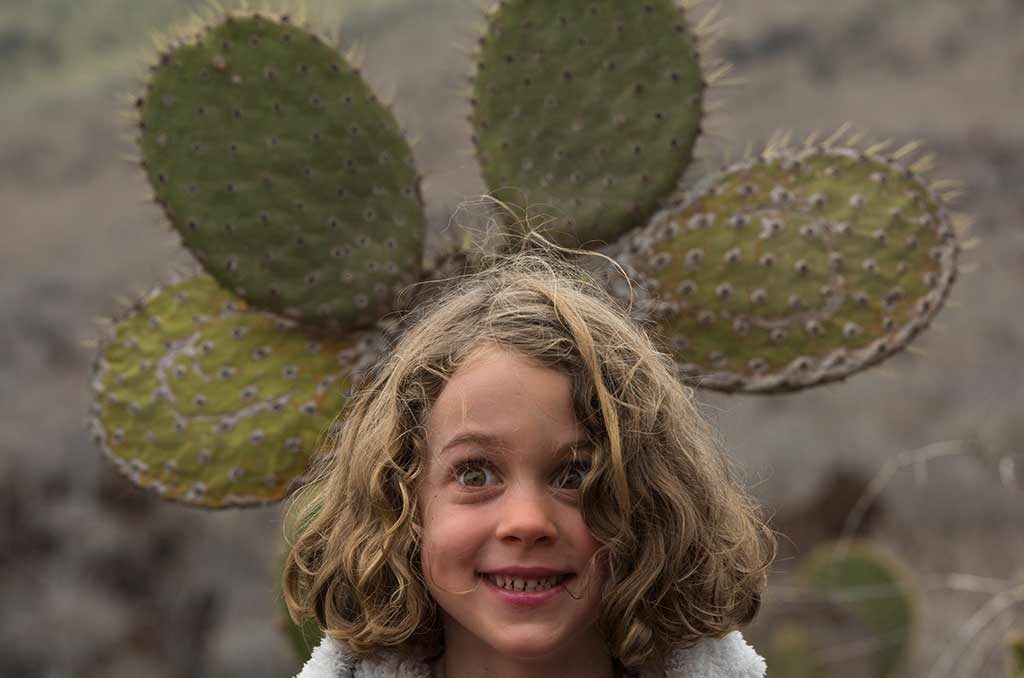 For Addie, the cutest six-year old you could ever meet her target was to commune with turtles for the first time in her short life. We found turtles by the dozen and the beaming smiles as she lay for ages at a time, spread-eagle on the surface rocking in the gentle swells of the shallows with up to five of the large, indifferent reptiles (as if she were simply another turtle) said it all.

Cassidy, 9, the go-getter of the quartet was on a mission of proving herself. She swam with the last of us in the water, beat us all to the top of the daunting Bartolomé boardwalk and exceeded her personal best in a hot 10 mile hike along the crater rim of the world’s second largest caldera of Sierra Negra volcano on Isabela Island. Her other, rather inspired, first was to commit one of her ‘baby’ teeth to the tooth fairy in the depths as the ship’s GPS hit 00 00 degrees latitude on the equator.

Willa, 10, wanted nothing more than to interact with sealions. Her dream was realized at nearly every landing and, with patience and an uncanny sense of which sealion might be the most inquisitive, spent hours during the trip sitting quietly until the curiosity of a young pup got the better of it and Willa was accepted and even became the object of a sense of playfulness from the kindred mammalian spirit.

Finn, 8, the only boy, of course wanted to see sharks. By the third day he had already broken free of the invisible reins of his parents in the water and was diving down to meet the docile white-tipped reef sharks on their own terms. Good street cred for next term in school!

The parents were enthralled by the wonder expressed by their kids and likewise for the grandparents for both generations of offspring.

The matriarch relived the magic of the islands that we had shared with her 23 years previously while the patriarch, after the first week and going in to the second had shed all sense of stress and previous reservations, it was almost as if he wondered why he had to get off the boat after 14 days as if he had found his new home!

For us, every trip brings something new and in this case it was two things, first a young humpback whale in the shallow waters of Floreana Island that swam alongside and even under our zodiac, secondly to bring our vessel alongside a stunning broad-billed swordfish (our first) sunning itself at the surface of the glassy waters of the rich Bolivar Channel. 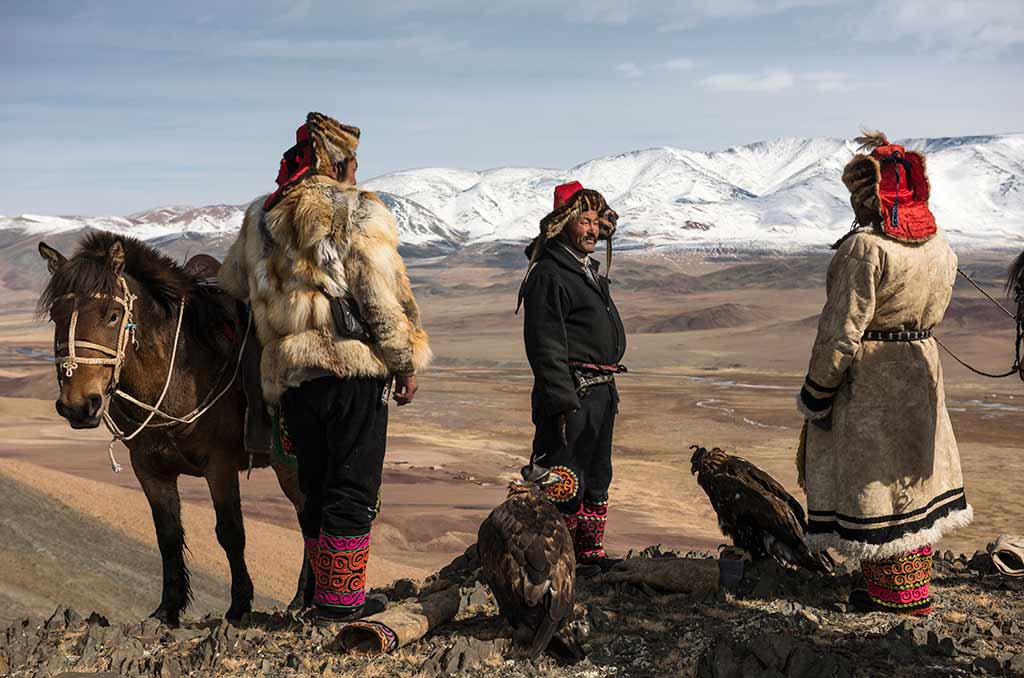 Mongola’s weather in the mountains out west might be unpredictable, but the kindness and hospitality of the Kazakhs never waivers. Spending a week exploring their territory involves moving our camp site every day or every other day. Depending on the size of the group we pitch at least a kitchen ger and a communal ger, sometimes two. 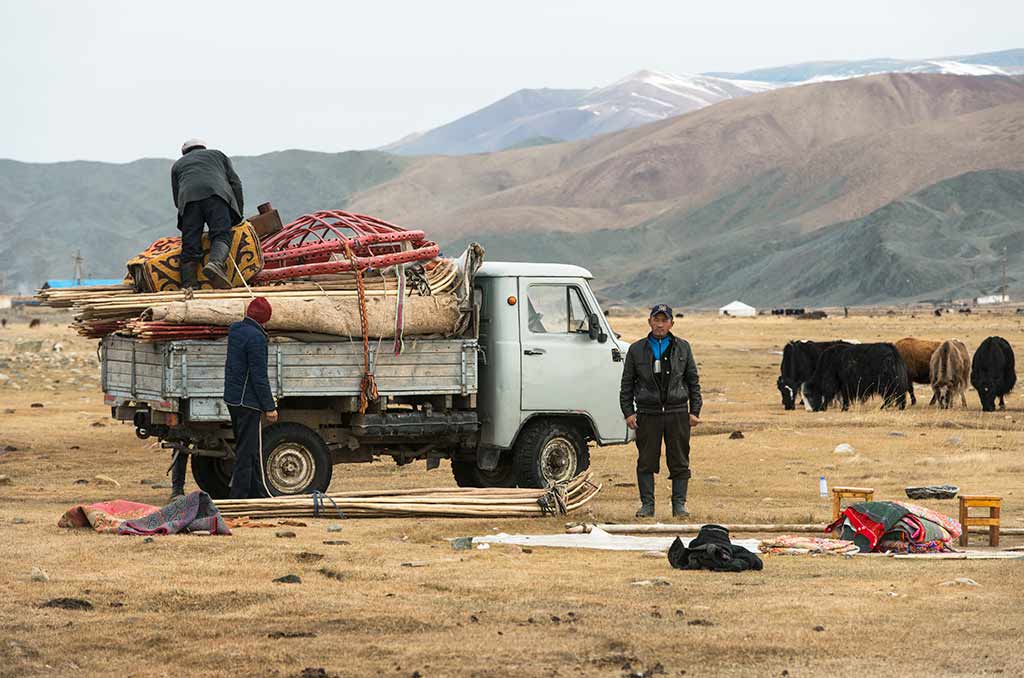 These get moved from place to place on an old Russian truck. At night this is a windbreak for the eagles. The food, tents and bedding go in on old Russian ambulance, hailing from world war II. These vehicles can go anywhere. When it is cold you just light a fire under it to thaw the diesel for about 45 minutes and then you are on your way. 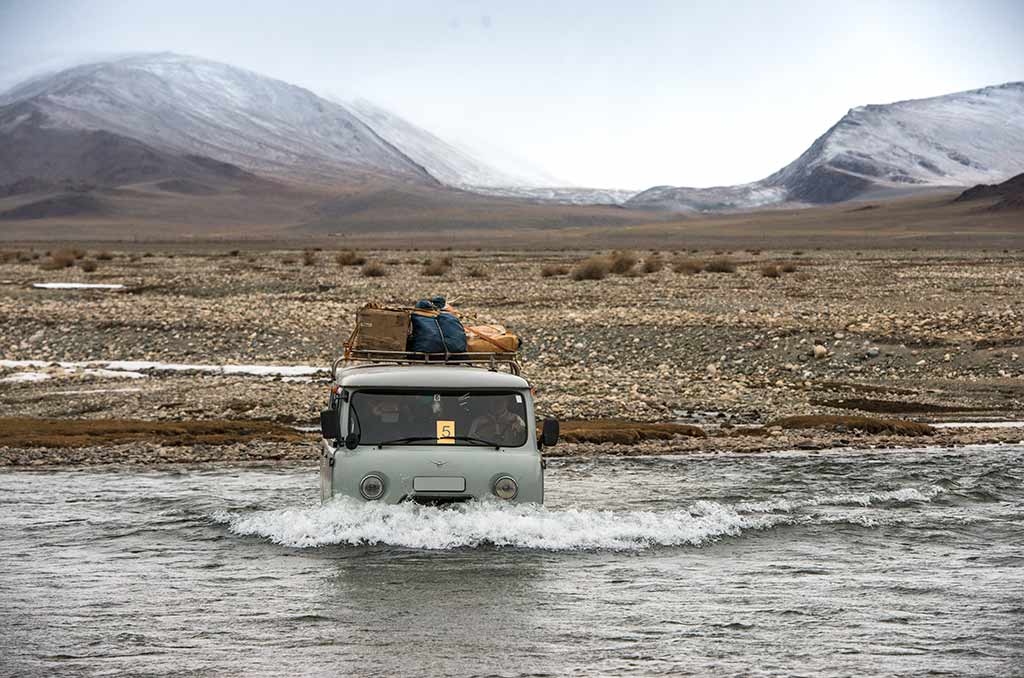 We move on horseback riding for up to 8 hours. At lunch we get hot tea or coffee made on a stove that is carried on the back of one of the Kazakhs. Meanwhile our Toyota Landcruisers go ahead to meet us at our next destination (possibly the grazing grounds during a different season for one of our eagle hunters) and all the drivers club in to erect the camp so we can arrive to a comfortable place to eat, drink and sleep. 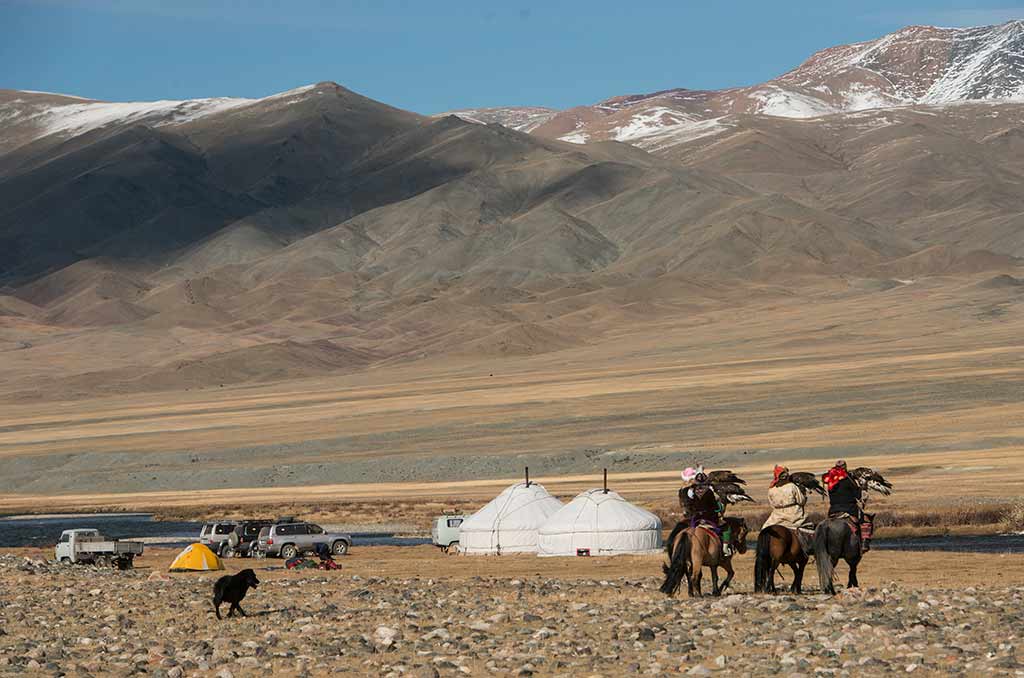 No sooner do we arrive to our new home and visitors from the surrounding area start arriving too. 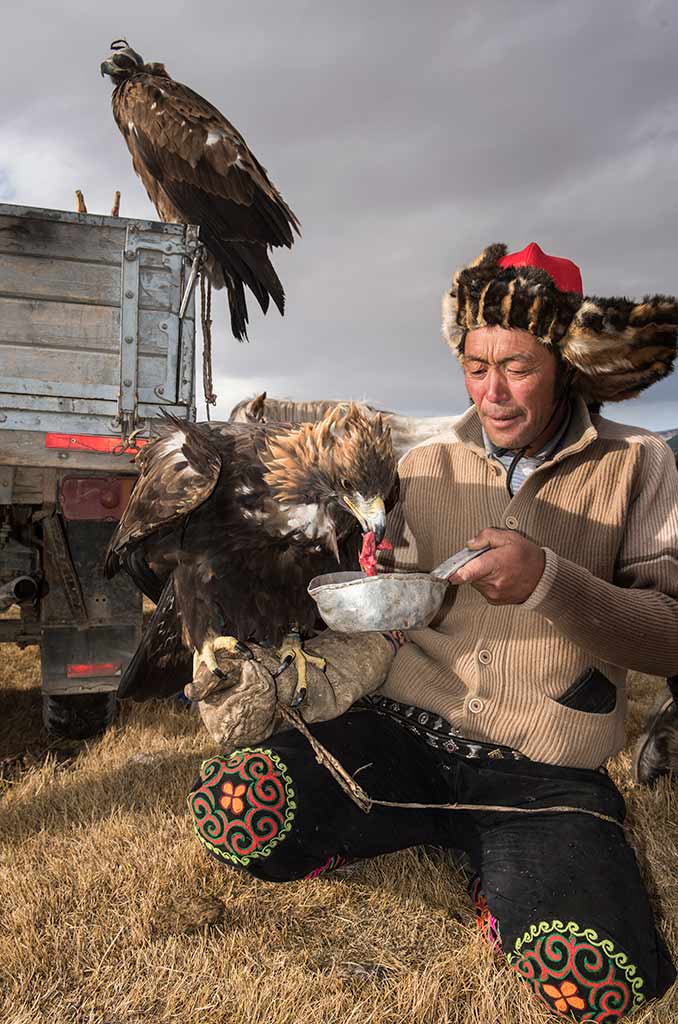 All eagles need to be fed and put to bed around our gers. After the cooks’ have fed all of us and a mountain of local people most of our Kazakh riding companions disappear to spend the night in local family gers, leaving us to baby-sit their eagles. We have expedition tents to sleep in but in the cold we migrate into the communal ger with our sleeping bags and radiate around the central stove to keep warm. To make sure we have a comfortable night, someone comes in every 2- 3 hours to stoke the fires. 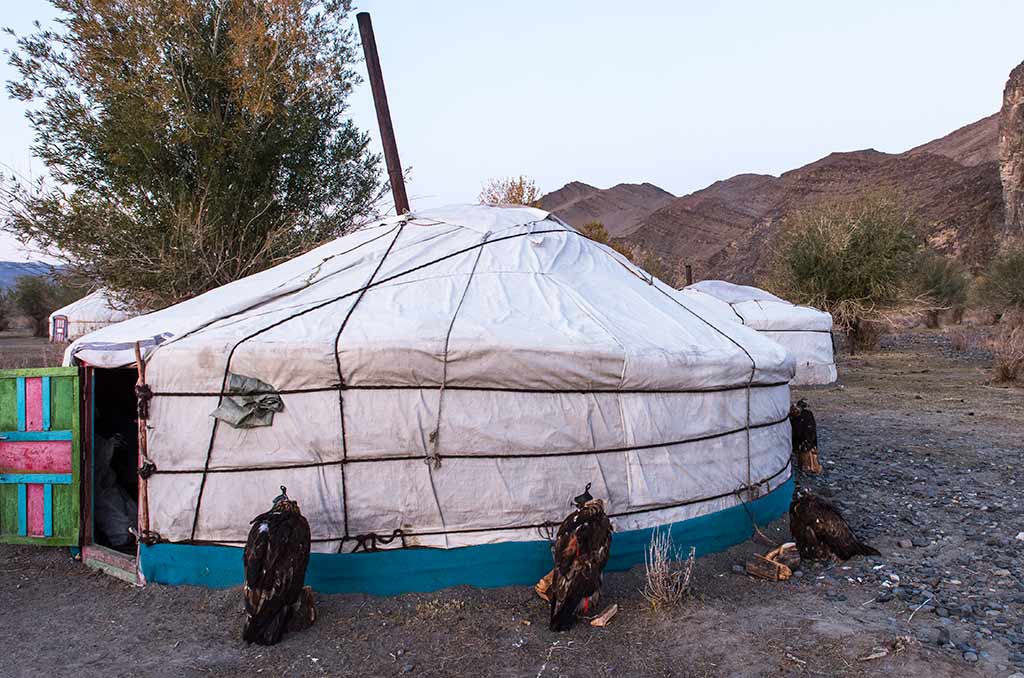 But as we start tucking into bed one of our friends comes in to serenade us with beautiful Kazakh music about eagles and love. 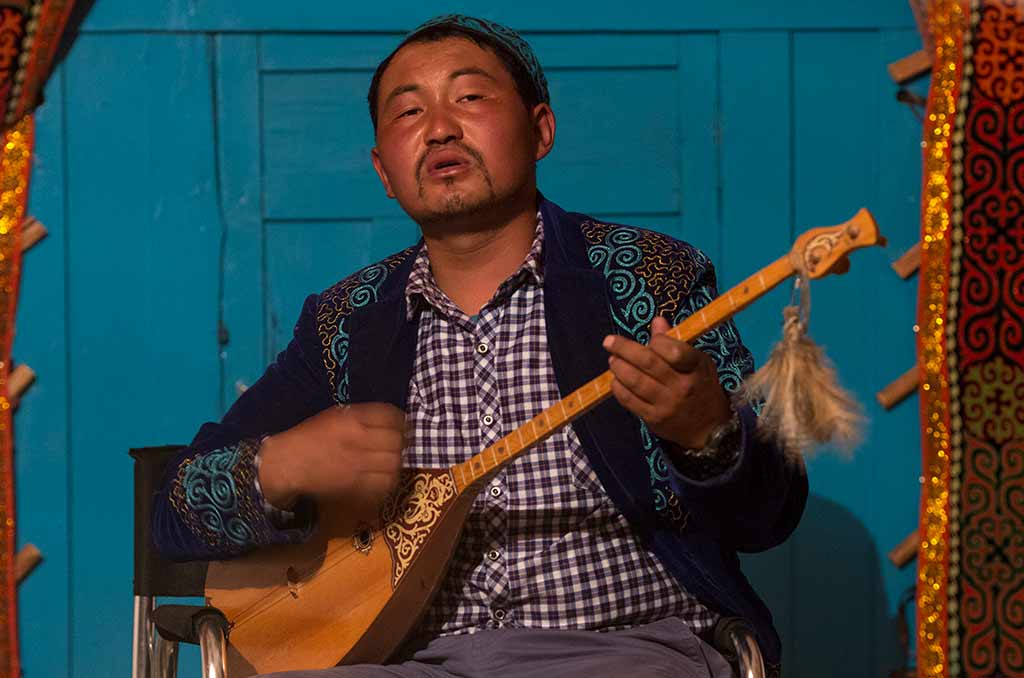 We also have a few of the eagle hunter’s dogs running along for the entire time. Pete’s challenge is to befriend them all so by the end they are eating out of his hand. Your horse just needs to stumble and someone is there to help. If you are not an experienced rider, someone will lead your horse. Where else can you ride for an entire day in the company of golden eagles, in spectacular scenery, crossing over mountain passes and through raging rivers, seeing no vehicles, no permanent homes and no fences. You camp anywhere, you stop everywhere and go into any ger for tea and an unending supply of homemade dairy products made from either sheep, goat, yak, camel or horse milk. These people are generous and fun and could not do more for us if we asked. Can’t wait to get back to Mongolia next year to laugh with and share our experiences and photos with our Kazakh friends who have become like family.
Renee Bish

I remember from my childhood that there were certain places in the world so far out there that they seemed almost mythical; Timbuktu comes to mind. Others were places whose name equated with punishment – to be sent to the Siberian Salt Mines for example. The threat of banishment was reserved for Outer Mongolia. Oh! I wish I knew then what I know now! Having once again returned from this amazing country I wondered how my upbringing would have been different if my parents, at the height of my naughtiness had bundled me up and sent me to Outer Mongolia. 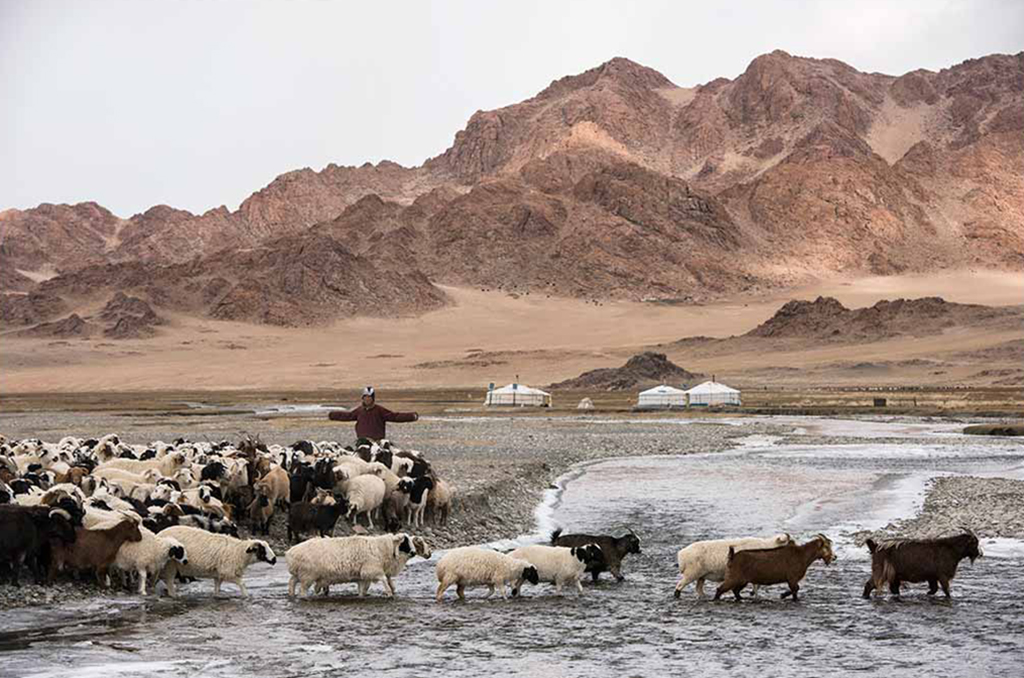 For sure I would have learned at the ‘School of Hard Knocks’, it is a tough place, producing tough people. I would have learned to coax milk from the stubborn teats of camels, the art of extreme horsemanship, a reverence for nature, camaraderie, the importance of family, deep friendships, a sense of welcoming, survival skills to overcome the harsh winters, religious tolerance, minimalist living, an appreciation of the wide outdoors and a constant longing for the taste of hard curd. All-in-all not bad qualities to carry through life. 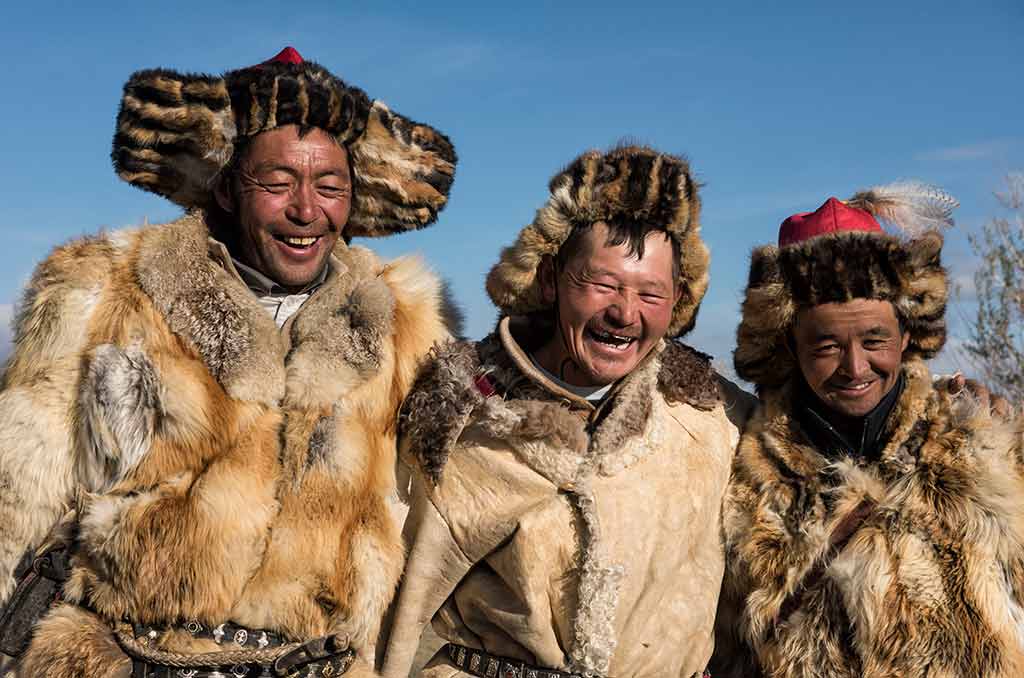 Regarding education and worldliness it is always a surprise to us how globally aware a herder in the Gobi Desert often is. Many times, for example, in the ‘developed’ world when answering people that I live in Ecuador they ask “Where is that?” In a nomadic herder’s ger (felt tent), through a translator, when learning I live in Ecuador they might say “Oh!” Between Colombia and Peru. “How is your president doing?” One of the positive benefits of a previous Russian occupation being the Russian radio access. 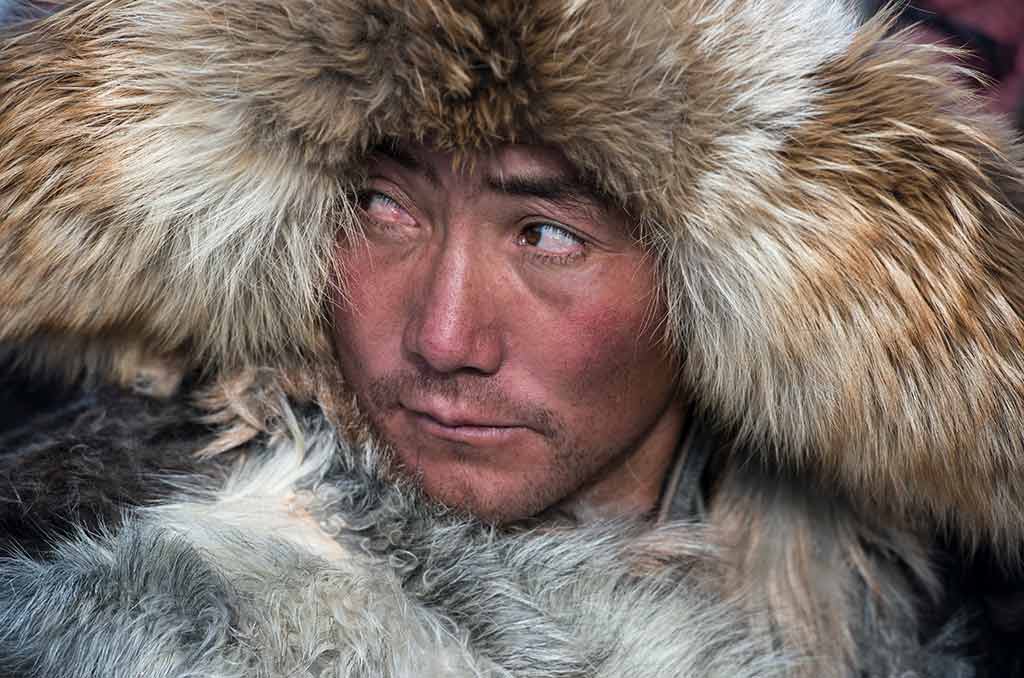 After a short absence since we were last in Mongolia (Reneé and I for a period even had an apartment in Ulaanbaatar (UB), the capital, for 6 months) we were keen to see changes. Apart from the heavy increase in traffic made up of a huge influx of 2nd hand Toyota Prius’s from Japan I only have good things to report. The atmosphere was friendly, pleasant and much less ‘Russian’ than before. Eateries were vastly improved as was service, hotels and shopping. 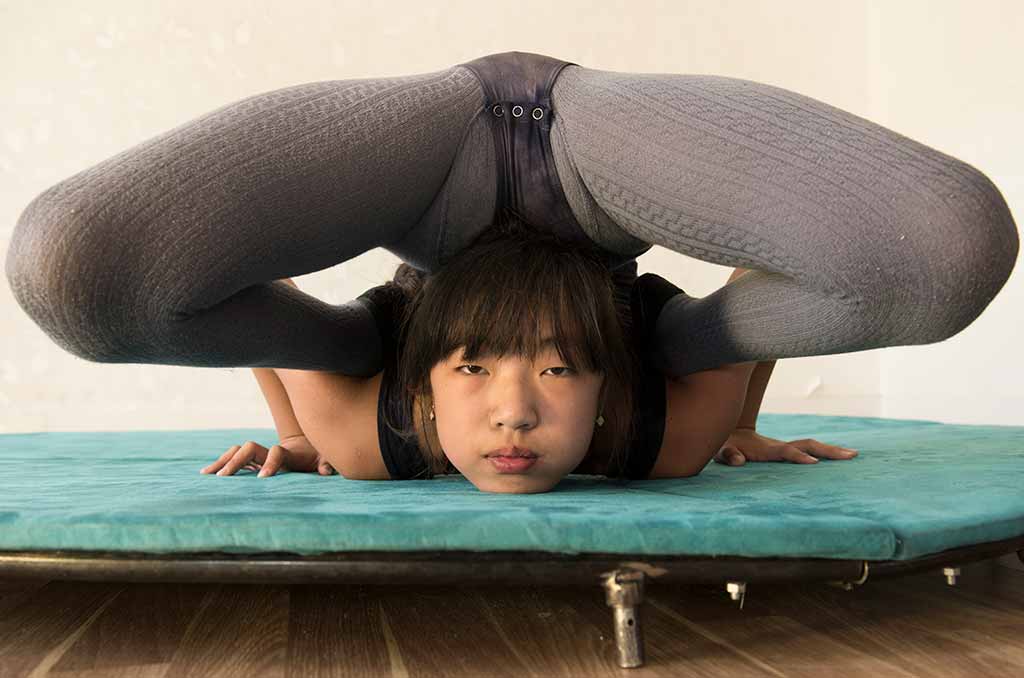 Over our journey through the Altai Mountains in the west with the eagle hunters, to the ever-changing scenery of the Gobi Desert we reaffirmed many old friendships and formed friends from past acquaintances. Mongolia, to us is much closer to heaven than the hell of old.
We are all guilty of something (overwork, succumbing to the pressures of stress etc.) and if anybody out there thinks that they also deserve some time in banishment then let us know!
Pete Oxford