OK, I know its not until September this year but already I’m getting excited about my next trip to the Pantanal in Brazil.

When I first used to go, some 10+ years ago not many foreign visitors were to be seen.

Having got to know the area well I was called in, by the same operator we still use today, to try to photograph wild jaguars that his team was seeing in a new area he was operating in from a floating hotel on the river! The guide and I traveled, we calculated, more than 1000 km on the river over many days, scouring the river banks. We hardly saw another human soul but the wildlife was spectacular. For fun, in my head, I would count the number of caiman I saw. I always got to 500 before lunch and would stop counting! Giant otter families were common, as they still are, along with a host of birds, from the huge jabiru storks, to fish-catching hawks, toucans, macaws and herons. Capybaras are common, sitting stoically on the sand banks, scanning, like us, the scene for jaguars.

On that first jaguar trip I saw 7 individuals which, for the time, was unheard of. I took the images to National Geographic Magazine where the editors began by not believing they were wild animals (Most previously published jaguar images, posing as wild, were actually done in the Belize zoo!). Indeed the magazine had had a photographer for months trying to photograph them, only succeeding, I believe, with a single individual at night using a camera trap. They snapped up my images even producing a fold out double page spread. I later also learned that I got the cover, in at least one region, when a friend in Spain mentioned it to me by chance. 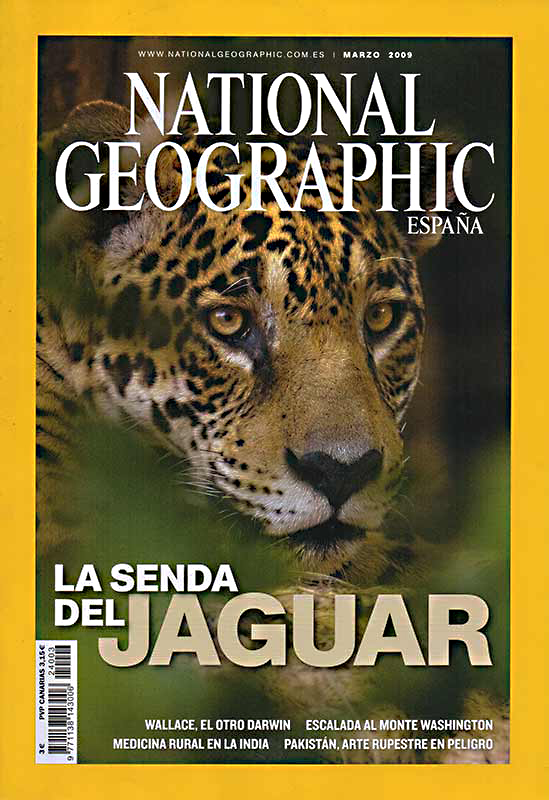 Jaguars are now commonly spotted (excuse the pun) and visitors are often able to spend quality time with them at a sighting. By now I have personally seen a score or more of different jaguars and come away with some once-in-a-lifetime memories. The big one, the sighting that still eludes me, is to watch a jaguar take down a large caiman in the water. (I did watch an adult female chase a skink all the way down a sand bank into the water once but it wasn’t quite the same!). I am just itching to get back there, to South America’s greatest wildlife spectacle and hoping that this year will be it! Care to join me?